How big is it? 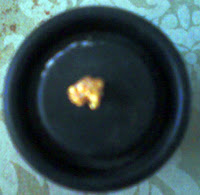 How big do you think this nugget of gold is that Dave found in the river recently? He sent this picture out to a friend of his who was impressed by how HUGE it was. The San Diego area is not known to have many large gold nuggets, unlike the rainier regions further north. Whereas Dave insisted his nugget was really quite small and not much to look at.

Confusion reigned until Dave's friend was finally told that the black 'plate' that the nugget is sitting in is not a plate at all, but is in fact a small film canister lid. The nugget is really only a few millimeters wide, not such a big deal after all. They were having trouble getting the camera to focus on the nugget instead of the lid, so they tried taking the picture from directly above, but not only did that tactic hide the edges of the lid, but the photo still came out blurry. Dave had not realized at first that, with the picture angled that way, others might assume the black backing to be a large plate instead of a small film canister lid. Perspective is a powerful subterfuge! Oh well, next time we will just have to find a bigger nugget that is easier to photograph!
Posted by Eva at 7:38 PM