In search of The Nuevo Silica Mine 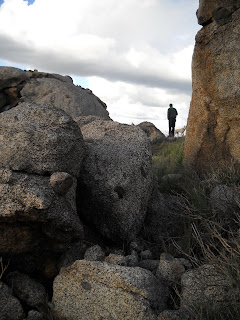 We left at 2PM on Saturday, a last minute decision to scout the area around Nuevo to look for the Nuevo Silica quarry. The mine was reportedly located behind a road that had recently been taken over by a church. One thing we needed to ascertain was if 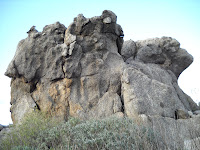 the church was allowing traffic to the mine. Rumor had it that a gate at the church was intermittantly opened and closed, thus causing a constant hazard to access to the mine. One of our numerous goals that day was to find a route that would bypass the church altogether. But doing that without even knowing the exact location of the mine itself would prove to be tricky.

First we drove along the base of the mountain, looking for any and all roads that headed in the right direction, but all were blocked off by gates or recently built 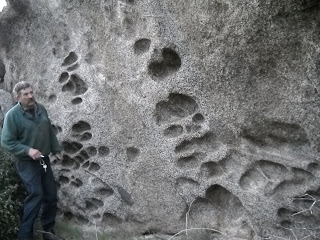 houses. Eventually, we realized we had little choice but to hazard the church route and were soon back at the road to the church (can't remember if there was a gate there or not!) that gave us access to a meandering dirt road until finally, ahead, we could see some structures and parked cars. Not sure what kind of reception we would get, we decided to take an alternate branch of the road that led into the hills to the left, instead of going directly past the church itself. 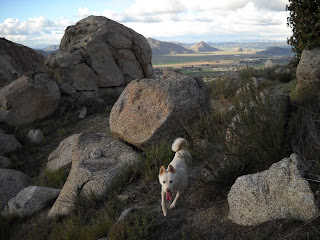 This side road meandered in endless spirals and cloverleaf patterns, the off roaders had obviously had some fun in that area. As we drove, the rocks slowly changed from rounded off on top to sometimes twisted and tortured shapes of nightmare. The lava here had indeed suffered before dieing but now it was reaching out even after death(2nd photo)! Other granitic rocks had large off colored bumps that looked like plague skin lesions (1st photo). One rock even looked like a weary petrified buzzard (second to last photo).

But despite the eery rocks, the area here was indeed beautiful, the artistic rocks interspersed with soft green winter grasses and white flowering bushes. The soft soil and smooth rocks also happen to be Sesame Pooch's favorite kind of environment to run wildly hither and yon, barely able to decide where she should run towards next. She trounces happily in photo 4, until in photo 5, you can see where Sesame Pooch is actually being eaten by a giant killer dog eating head chomping rock! (click on the photo to see a larger view) ;-P 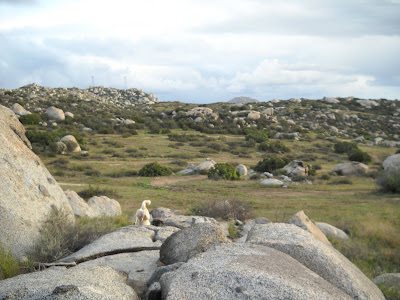 As we drove and intermittantly parked and wandered, Dave told me a lot about pegmatite dykes and how they formed, most of which I have now totally forgotten! But he did assure me that the area looked promising and indeed, we did find some streaks of white rock in one area which was a pegmatite dyke running along the ground. Inspecting the white rock, we found a lot of white quartz along with some pinkish feldspar and the occasional black tourmaline. We also found an area where several large rock faces had weird indentations like the fingers of God had been poking and probing at His Playdough creation (3rd photo). 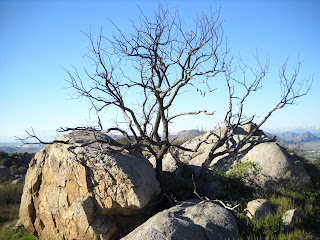 But it was getting late and Dave wanted to try a new way out, down hill instead of back up towards the church. Luckily, we soon found yet another branch of dirt road that lead in the right direction, and as we followed it, it looked more and more commonly used, always a good sign when you are hoping your road will pan out.

Soon it was already dark as we continued to pick our way along strange roads, but we knew we were almost back to the main road and eventually we did make it. At one point, we encountered one of the roads we had looked for desparately on the way in but could not find! But at least we now knew of a way into the area without going 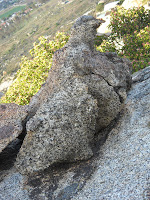 through the church. Or did we? First and most important, was that really the route to the Nuevo Silica mine? Since we had not actually found the mine itself, we still could not say for sure. The second question was, even if it was the right route, 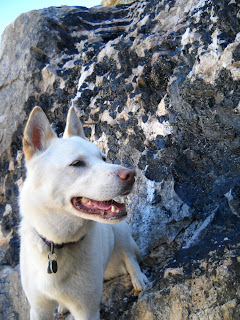 after all that meandering, did we even stand a chance of finding the same route twice? Both questions would soon be answered in spades by the end of day two, which will be the next posting. But as a coming attraction, I give you the bottom photo. Hint: the big black spots are big black tourmalines! (Plus it looks like Sesame Pooch actually survived her encounter with the killer dog eating rock after all!)

To see part two, "Finding the Nuevo Silica Mine" click here.
For additional pictures of the mine, click here.
Posted by Eva at 9:20 PM