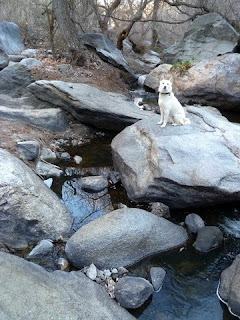 A giant handful of thick red garnets, the size of gumballs, their edges gently worn down during their long travels along the sandy river bottom, this vision I had in my mind as I waited in the parking lot for the others to arrive. Sesame Pooch, perhaps sensing the impending adventure, wagged her tail eagerly at my side. Of course, Dave had thought Mike wasn't coming. And Mike had thought Dave wasn't coming. So the whole thing was almost called off by accident, but finally we got it all sorted out that everyone was in fact coming. And so we came. But where were we going? That was the REAL question!

In my mind, I could only think of those garnets that Dave had shown me several weeks earlier. He had said they came from the river, clogging the sluice boxes of the gold hunters, of all places! The gold hunters had looked upon them distainfully as mere hindrances to their travails. But Dave had found the common sense to save as many of the garnets as he could. Now I wanted some for myself. Oh sure, they were rather opague garnets, and their edges were gone, but hey they were big! And they were red! And they would make a reeeeeaaaaally nice necklace after being cut into halves and made into cabachons. I have always wanted to make some garnet cabs from self hunted garnets, but in California, large garnets are not common. So far, I had only hounded small specimen samples of garnet. And yet Dave had found these large garnets right in our own backyard of San Diego! As the boys yammered on about this and that potential location for the day's travels, I realized that I had little to add other than, "Yeah but does it have garnets?"

Perhaps because they were getting tired of me, Dave did indeed assure me that a place they had finally chosen along the 76 freeway did in fact have garnets. If you could find them. But that was enough for me. We took off in 3 separate cars, I and my friend along with Mike heading toward the river and Dave going back to his house first to pick up gold pans. Why had we not brought gold pans in the first place? I guess that's just how organized we really are. And of course it ended up taking Dave two more hours just to catch up with us because the route he had chosen ended up being clogged by an overturned vehicle. And not long after he arrived, he ended up having to leave because of a prior engagement. Sometimes, it sucks to be Dave.

But at least we did arrive at the river, and eventually we did even have some gold pans. First taking up residence near a large downed treetrunk that crossed the river from bank to bank, I spent a long time digging in one spot looking for... (I think you can guess at this point) ...garnets! But there were none, not even a tiny little bitty one. Next I spent time picking up pieces of quartz and inspecting them. Since this location was downstream from several well known tourmaline mines, we could potentially expect to find any kind of pegmatite material, quartz crystals, tourmaline, kunzite, etc. Indeed, we did find many pieces of schorl (black tourmaline) as well as some half formed quartz crystals. One piece of rock even sported some tiny bright red translucent spots that might even have been garnets, but you had to squint hard to see them as they were so small. I guess I would not be making any cabs out of those!

It was hard to imagine this this lazy trickle of water called a river had only a few months earlier been a seething monster that had tried to drown Dave. As we picked through the lazy silt, Mike told me the story of how Dave had been standing behind that very same large treetrunk now in front of us, in the middle of the river, panning the sand under his feet, thinking this would be a very likely place for gold to have accumulated, when suddenly a hoard of sand flushed under the log. That was the sand that Dave had been standing on and so instantly, Dave was pulled under the log by the raging current, the underside of his chin hitting the top of the log as his feet went down and under the log. Luckily, he was, with difficulty, able to drag himself out of the current safely, but not before recieving a bit of a scare and also losing his gold pan downstream to the river current. But what kind of gold hunter loses his gold pan to a measly little river, that's what I want to know! Oh well, I guess I'll forgive him. This time at least.

Back in the present, we continued to look for gold and garnet, but most of the silt that Dave had so eagerly panned previously when the river was in high flood was now covered over by larger rocks. Rocks that were not garnet, I might add!

Eventually, we decided to trek upstream through a low but rather thick hedge of poison oak, to a picturesque water fall area where the river percolated gently between large boulders. There, Sesame Pooch frolicked happily with my friend's dog, oblivious to the dangerously itchy three lobed leaves all around her. Until eventually, Sesame, in her carelessness, accidentally slipped and fell between two steep boulders, clawing and scratching but unable to make the high leap out, panicking in her frenzied efforts to escape the water below, until my friend finally came over and dragged her out by her collar. First Dave and then the dog had almost fallen victim to this innocent looking river!

From my perspective some distance away, all I heard were a few anxious sounding exclamations from my friend about the dog and some kind of problem. But by the time I made my way over and figured out what was happening, it was already over and my dog was already running back to me where she felt the need to recuperate for all of 7 seconds before going back to leaping between the boulders in glee. In this scenic area, we took many pictures and critically inspected the silt for gold panning potential, but the sun was already slipping behind the mountain and it was time to go. Maybe next time we would bring a sluice box and find some of those garnets! Right now, I am thinking that would be the best course of action, but then again, three days from now when I find out how much poison oak response I will develop, I just might change my mind!
Posted by Eva at 9:34 PM