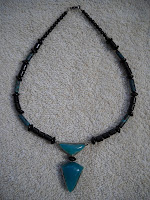 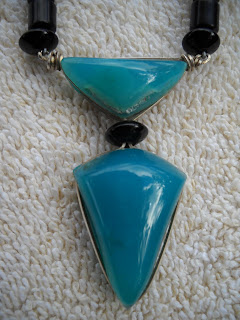 This blue stone was sold to a store by a mystery person off the street. Its origins are unknown. I bought the rough and cut this blue agate material out of the host rock to make these two blue cabachons and this necklace. The color of the cabs is a striking bright blue and on one corner along the side (too small to be visible to the camera), is a small 'flower' of what looks like malachite. I got the rough for nine dollars, what a deal! Does anyone have any idea where this material might have originally come from? Since it's blue and looks like agate, I am guessing it's likely to be a high quality gem silica of some kind, probably from an older collecting location.

Update: OK, looks like most people agree this rock is probably gem silica, perhaps from Arizona. It also looks similar to Needles Blue agate, which is also a very nice colored blue stone, but the host rock on my cabs does not look like rhyolite which is often the host rock of Needles blue. Here is a pic of the back of the cabs which shows some host rock that I left behind when I cabbed it. 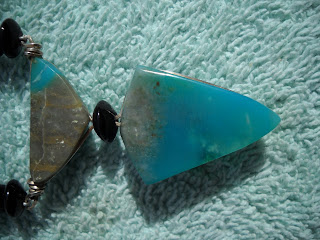