Finding the Nuevo Silica Mine 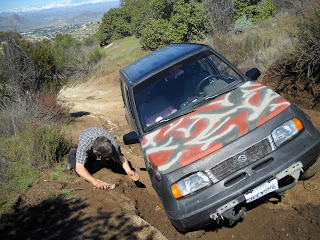 The next day dawned cool and crystal clear, the lingering rains now swept away by a perfect day. We started well before lunch with Dave sporting more research on the location and a much better photo from Google Earth. His plan? He wanted to try coming at the mine from a whole 'nother direction, this time further North. He had seen the mine on Google Earth and felt we had been close to it the day before, but that there looked to be better roads coming in from the other side. So we drove along another paved road for a long time and then by chance, spotted an offroad vehicle turning off the main road in front of us. In a split second, Dave decided to veer and follow. We had no idea where this dirt road would lead but it was going in the right general direction. 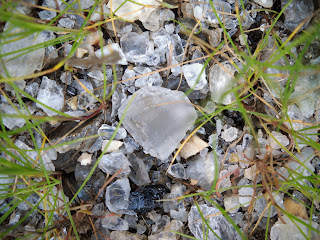 The area turned out to be an offroad mecca, with substantial moguls and side roads built up in many places. We crawled along for some time, attempting to head towards the power lines ahead, which Dave knew from Google Earth were near the mine. At one location, gold colored mica was so thick on top of the road that the road literally looked clad in gold. I tried to take a picture of it but unfortunately, the camera could not properly process the gold color and the picture only appeared to show a shiny wet road. 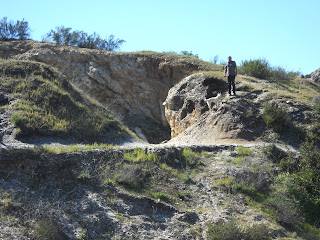 At several places, recent heavy rains had substantially eroded the road, and at one point, just inches from high centering, we had to stop and fill in some of the ruts before moving on. In the first photo, you can see Dave, who was supposed to be filling in the last part of the rut, as he gets distracted by a pretty rock and has stopped to inspect it. I guess you just can't keep a rockhound away from the rocks! Just before that, I had been collecting large rocks to throw into the ruts, when I unknowingly grabbed a rock that was covered in fire ants underneath. Cluelessly carrying it along, it was not until I reached the ruts that all the ants collected on my hand simultaneously bit me. How they can synchronize like that is beyond me! The lesson for me is to pay more attention to my environment. 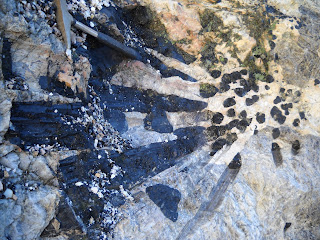 Eventually, we were on our way again only to stop again shortly to follow a long skinny strip of pegmatite banding. Again, we saw white quartz with pinkish feldspar. I walked for at least a half hour, following the white lines, but not finding anything quite worthy enough to become excited about. But I couldn't quite get myself to stop following those amazingly straight lines in the ground! Any minute, the pegmatite might improve and I might find some garnet or tourmaline! Or so I kept telling myself as I walked until finally running out of white lines and returning to the truck. While I was gone, Dave had spent some time digging into the dyke closer to the truck, but he also had founding nothing of interest, just some tiny ends of what he called 'red tourmaline' but what I thought were probably tiny dark red garnets squished into the host rock. [Edited to add: Looks like these may in fact really be zircon] We continued on, choosing roads, and then sometimes backtracking and unchoosing those same roads, but always mostly heading towards the power lines. 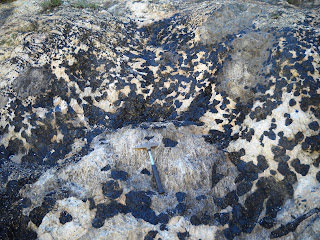 Until finally up ahead, we saw chunks of broken ice lining the road. Or was that actually quartz!?! (see 2nd photo closeup) I was so eager, I jumped out of the truck before Dave even had time to park. I could see hoards of white and clear quartz and even the occasional black tourmaline interspersed between. We knew we had to be near to something because where had all these broken chunks of rock come from? They were clearly tailings, and just up ahead, Dave saw the entrance to the quarry (3rd photo), well hidden until you were right on top of it, a cut out area beyond which was a short but steep trail into the open mine pit below. We had found Nuevo Silica mine! 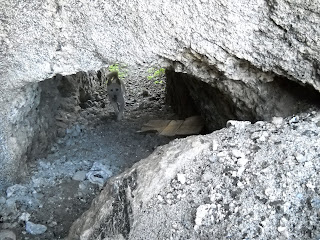 At the top of the quarry, long black veins of compressed mica ran along the walls. But the most striking part were the huge black tourmalines embedded lower down in the mine, directly in the rock walls, many of them as big as my arms (4th photo, note the rockhammer for perspective, and 5th photo). More pressure lower in the mine had grown tourmalines instead of mica veins. The tourmalines made a variety of shapes in the walls including parallel lines, fans, bullet like blobs formed from an end on view, and even in some places, meandering lines as if black paint had been splashed against the walls. The walls were steep and in many places, deep pockets had been dug into the walls, but Sesame Pooch easily danced up the sides using tiny footholds that only a dog could find. In a corner of the mine, Sesame also found a small 'short cut' tunnel that also led out of the mine (6th photo just above) We spent considerable time investigating and collecting bits of black tourmaline, until Dave found another hole in the ground further away. 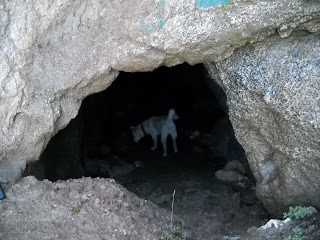 This time, the hole was a horizontal tunnel instead of an open pit. Sesame was the first to inspect the mine entrance in the 7th photo (to the right). We speculated the goal of this mine may have been gold instead of silica. The tunnel disappeared far into the Earth, but water dripped from the ceiling, the floor of the tunnel was heavily flooded and even the entrance was incredibly slippery. (8th photo just below/left) 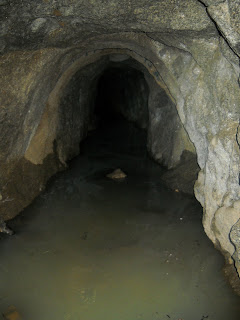 We contemplated wading further in, as the water did not appear high, but on thinking about it, we realized the murky grey water could have hidden a vertical shaft or any matter of other hazards, making for a potentially dangerous situation. Besides that, neither of us had brought an extra pair of shoes! So we decided sometimes discretion is the better part of valor and moved on. Perhaps later in the spring, when the water table drops. this shaft may become more easily accessible. However, near the entrance to this tunnel, in its tailings, we did find the most clear of all the quartz pieces we found that day, many of them, although not large, were water clear and suitable for faceting. 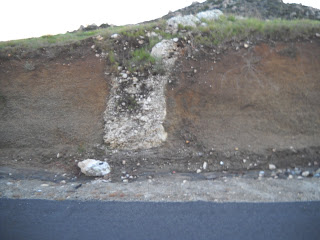 After more collecting, we headed out along more off road moguls and bumps back towards the main road. Since we still had a little bit of time before absolute dark, Dave, not wanting to waste any of our time up there, decided to go further down the paved road and looked for additional access points, perhaps some that might be less difficult and bumpy. Eventually, after many dead ends, we did find another road that went through, this one much further East. We followed it up directly to the power lines, the ruts here also being difficult in a few places. At the top, we found a thick pegmatite dyke running right under one of the power line foundations! More pinkish feldspar was there to be found. And on we went, our shadows now very long indeed and then next thing we knew, we were crossing another road, this one a very nice new paved one. Where had this one come from!?! We had not seen any paved roads previously but we were still far from the mine. 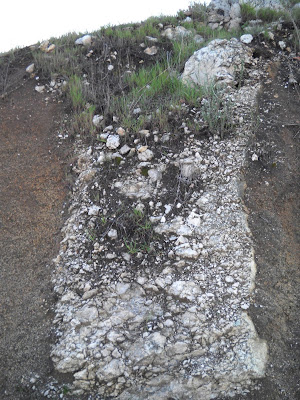 Whatever the case, we followed it and found it was another road that we had looked for fruitlessly the day before. We even saw pegmatite vein running right through the road! (last and 2nd to last photos) This vein also contained some black tourmaline but all the pieces I saw were locked inside the host rock. But eventually we could barely see, it was so dark, so we headed back down hill to find out where this paved road connected to the roads below. At the end, we found this road was actually blocked by a gate, which is why we had not found it the first time. Google Earth didn't tell us about the gate! ;-P The gate would allow people out so we could leave this night, but getting in would have required the password or a clicker code, neither of which we had. Anyway, it was dark now, so the rest of that road and its side roads will have to be an adventure for another time. But we found our mine and we found an heretofore unknown and ungated path to that mine. We found a prodigious supply of black tourmaline and water clear quartz and we avoided getting seriously stuck numerous times, so not bad for a day's work!

{You can see part one of this adventure here: Rockchaser: In search of The Nuevo Silica Mine}
For additional pictures of the mine, click here.
Posted by Eva at 8:24 PM