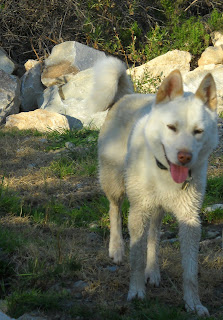 We went out searching for rocks again this Saturday, right after open rock shop hours were over at 1PM. Our goal was to scout for areas around town that might contain fossils. The problem is that recent road and house construction has resulted in most offroad access now being blocked off by many very irritating gates with locks on them. We drove along looking for any dirt road to travel upon, but time after time, we found nothing. 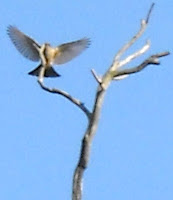 Finally, we left the truck in a parking lot near a river and started walking up stream, picking through large boulders as we went. The landscape was surreal because for a large swath of the river, the surrounding boulders had actually been cemented in place to prevent erosion. The day also started off in a less than savory way because Sesame Pooch found an old dead fish on the bank and decided to roll on top of it. Dogs have the worst taste in perfume! You can see Sesame in the first photo looking smug and happy with herself as usual. But I got my revenge by dunking her into the river a few times to get the smell off. Stinky river smell is still much better than stinky fish smell! 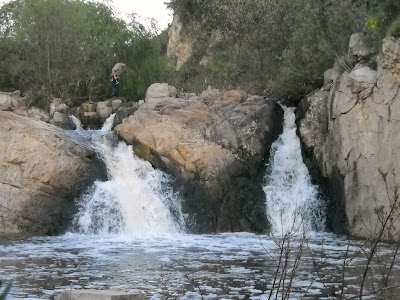 Next we hiked along an old dirt path next to the river and scrambled up a steep hill to investigate the rocks, which were mostly granite plus some basalt. On top of the hill, on a large dead branch, sat a native finch bird. As I trained my camera on him, Sesame Pooch ran up the hill and startled him, and I snapped the picture just as he extended his wings. Score one very nice photo 2! 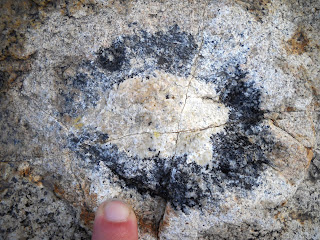 Going back down the hill, we continued along the river and soon heard a roaring sound, which was surprising. San Diego is supposed to have only one decent water fall in the entire area. This is an often quoted fact amongst local hikers and one that I have always been suspicious of. And sure enough, after hopscotching back and forth over the river on boulders, and clambering through riparian shrubs, we began to hear the telltale roaring sound and shortly found another, apparently not well known, water fall far along some animal paths. It took us some time to find a path across that would not involving wading, but eventually Dave was able to make his way to the top of the falls. That's him on top of the left side fall.

Some of the granite boulders there in the river had strange hoof shaped imprints of half grown black tourmaline. (photo 4) And we found some old pipes, perhaps once used for harvesting water from the river, but little else of interest. (Gratuitous picture of Sesame looking cute on the river, last photo to the right) 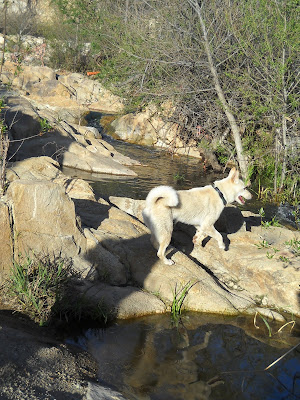 As usual, Dave was ready to stay well past the dropping of the sun behind the mountain, and I finally had to prod him to leave before it became too dark to see the rocks in front of our feet. I moved quickly back toward the main road and then searched for Sesame Pooch's leash, only to realize that I must have left it on a rock somewhere. Too late to go back! I cast around for bits of stray rope or string, to no avail, until I finally figured out that the end of a rockhammer stuck under her collar worked well enough as a sort of makeshift leash. Following the river back under the main road, I wanted to make sure she stayed near me and far away from the traffic. The rest of the trip back to the truck was without incident and we now know of one more place in San Diego that does not have fossils!
Posted by Eva at 9:59 PM