The Searchers at Chuckwalla Springs Day 3 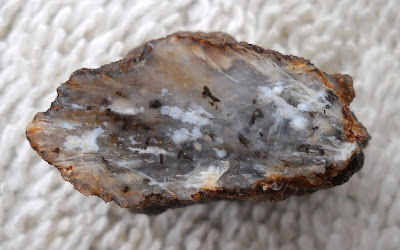 On day three, we decided to take an easier and safer road to an area known for saginite. Saginite is more of a morphological term than a geological one. Saginite is basically a word that described when a rock contains a spray or fan shaped array of needle like structures that often look very striking. In fact, the word is vague enough that opinions vary on exactly what does and does not constitute saginite, but this location had the classic looking golden or black needles in clear or white agate. One piece I found even had some black needles mixed with back spots in white agate with white spots and some clear areas (photo 1). Very interesting! But at first, I had to admit I couldn't find a darned thing. 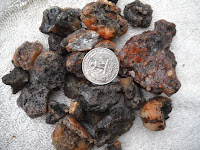 The good saginite agate at that location looks much the same as the nodules that contain no saginite, and most of all of them have a lot of desert varnish and black stuff on the outside, such that you can't really see what is inside unless you break them. See the blah looking exterior of the rough saginite in photo 2. But since the nodules are small, you don't really want to crack them in half either. However, sometimes you can just barely see the fan shape of the saginite on the outside of the rock as well (photo 3). 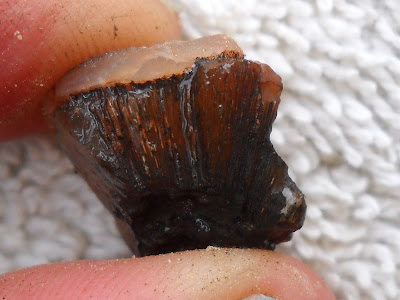 Eventually, I wandered further from the main site and found some veins of white and clear plume. A few pieces had red centers that were very striking but I couldn't find the source for those. Everything seemed almost randomly scattered and fickle veins changed colors and pinched in and out erratically. At one point, one of our party called us over and showed us where she had found a very large desert tortoise that seemed only slightly irritated at our arrival, and then just a short distance away, she found a much smaller baby desert tortoise smaller than my fist. Of course, I had to have pictures of both! (photos 4 and 5) Finally, we heard the leader of the group calling us back as we were the farthest out. They were already heading back to the trucks and we needed to leave as well. 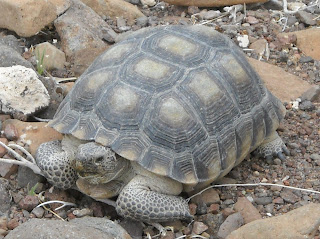 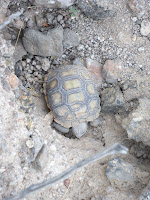 Walking back out, one of our group fell and gouged her elbow on the ground only a short distance from the truck. Solicitously, Jay Valle, our driver, volunteered to fish out some nice clean band aids for her to stem the bleeding from the cut. No sooner had he popped open the tin of band aids than did we see a mummified lizard skeleton on the very top if it! (see photo 6) Only a rock hound would think to store a pristine skeleton there on top of the band aids and then forget about it and leave it for months! Luckily, band aids come sealed in their own wrapping and we all had a good laugh at the sudden appearance of the skeleton in such an improbable location. 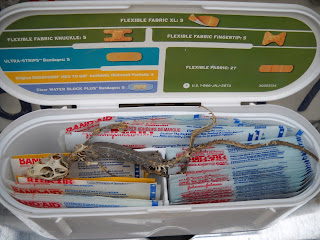 The next stop was actually just along the road going back. Some years ago, some of us had been working with poor directions and had been unable to find what we were looking for, but we did instead accidentally stumble upon a tall outcrop of white quartz stained with copper ore. Now we would lead the others to that site and many of us were soon busily clambering around on the outcrop and picking and chiseling away at the white and blue walls of quartz. (photos 7 through 11) 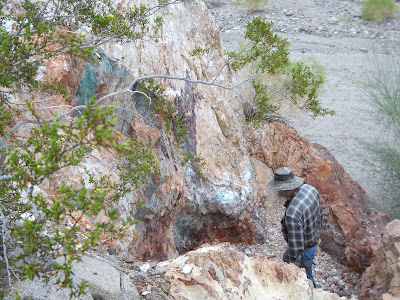 One of us experienced with gold hunting said the rock was probably originally investigated for gold because copper and quartz are both indicators of possible gold presence. Many jokes about finding gold nuggets were then bantered around but not surprisingly, no actual gold was found. There were rumors of an abandoned crumbled stone cabin somewhere near and we also found an old abandoned car with thousands of bullet holes in it, which also made for a nice picture. 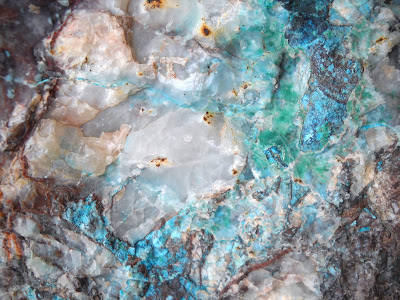 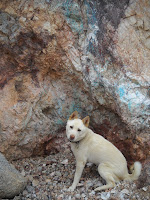 From that location, the rest of the campers took the nice easy gravel road back to camp. They had to leave that night and so wanted an early start, but we weren't leaving until Monday morning so we opted to go back to the saginite location for further exploration. Our legs were now getting tired, but that did not stop us from walking over many hills and ravines to scout for agate anywhere we could find. Most of the region had no rock of interest but in a few places with did find more agate seams, some with interesting plumes and shapes. And I found some nice Drusy, most of it white and clean already so that I will not have to remove any staining in order to make it look good. 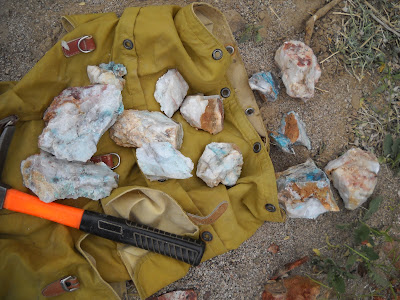 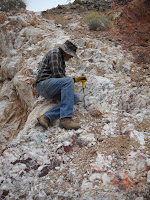 We ended our walk by cutting back through the main traditional saginite collecting area and towards the end of it, I suddenly began finding saginite. Perhaps I had finally gotten the eye for it, but also it seemed I was suddenly in a very productive 10 foot diameter region that had lots of pieces. Almost every nodule I picked up looked to have some saginite and we both stopped and scoured that area. Once having thoroughly checked that area and moving slightly further away, I only found one other piece and after a consider time of fruitless continued searching we had enough and continued back to the truck. I had a pocketful of small agate nodules and hopefully many will contain saginite, but I won't know for sure until I polish some corners so I can see inside of them. The day had been good but they sky was darkening. 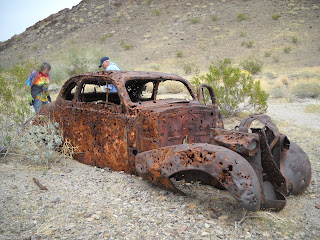 We went into Blythe for a steak dinner and then returned to camp to burn the rest of the firewood. That night, the wind picked and light rain fell in the morning hours. But it stopped at sunrise and were able to pack and leave in comfort. 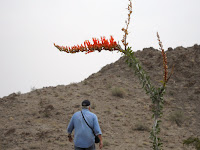 It was time to say goodbye for now to the blooming flower fields of the desert in springtime, sharp red ocotillo flowers pointing skyward. Another wonderful adventure came to a pleasant conclusion and now I can't wait to cut and polish my new treasures!