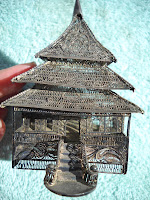 Seek and ye shall find! Every weekend, my mother likes to make the garage sale circuit. Many times, she finds little of interest but sometimes she makes some extraordinary finds. One day several weeks ago, she was rummaging at the bottom of an old box filled with heavy plastic dolls when she spied silvery colored lattice work. Carefully digging further, she realized that covered by these ugly worthless dolls were solid sterling silver lattice house replicas. She began to pull out whimsical little silver houses, one after the other, many with weird pointy roofs, for a total of nine pieces including a palm tree and and an ox pulling a cart. The wheels even turn on the cart! Trying to maintain her composure, my mother asked the woman having the garage sale, as casually as she could, "How much for the little houses?" 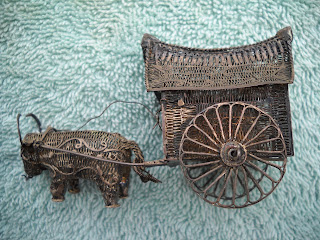 My mother was so surprised that she quickly gave the woman three bills, bundled up the silver houses, and drove off immediately before anyone else would notice what she had! There in the top photo, you can see my hand holding one of the medium sized houses, which is as big as my hand. Unfortunately, when I took the photo, I accidentally left off the top little point of the roof. A week later, the same woman had another garage sale and my mother returned to ask where the little houses had come from, but the lady did not remember. And there was nothing similar or valuable anywhere else in that sale. And you can bet my Mother looked hard! 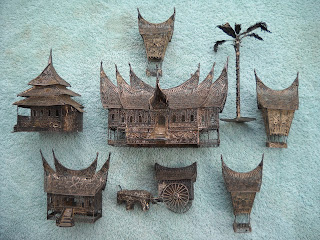 However, some clues were to be had about the houses' origins because on the back of the largest house was written in silver, "KT Gedang Perak 925." 925 universally means silver, so that was the easiest part. The rest took some serious work on Google, but I finally deciphered it. 'Perak' means 'silver' in Malaysian. KT stands for 'Kuala Terenggano,' a large city in Malaysia. And 'Gedang' is likely a different spelling for 'Gadang' as in 'Rumah Gadang.'

What, you say you don't know what a 'Rumah Gadang' is? Well that's good because neither did I! Luckily, Wikipedia knows and has a fascinating article here: http://en.wikipedia.org/wiki/Rumah_Gadang . In case I ever had any doubt of the authenticity of these cute little houses, once I saw this photo below of the real thing (taken from the Wiki article), I realized these little silver houses were not constructed from whimsy at all but in fact were careful replicas of the real thing, even down to the little points on the rooftops. Wow, these places make my home like a shack!

I guess it's not surprising, then, with all this effort into the decor, that these are the traditional homes of a Sumatran clan called the Minangkabau whose cultural structure is matrilineal. That means the women own and run the property in this clan and these houses are passed from mother to daughter. Take note all you men! ;-P But the religious and political affairs are typically left to the men, so I guess they aren't completely left out. However, what is even more interesting is that these people have kept their traditional matrilineal culture, even though their culture is also strongly Islamic. 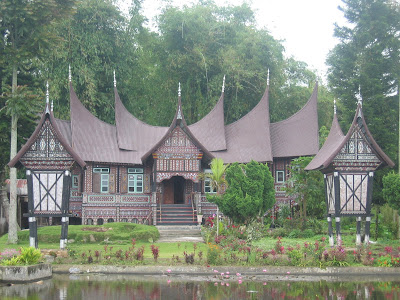 Although the clan is from Sumatra, many have settled in Malaysia and one can only surmise there is or was probably one of these houses in Kuala Terenggano somewhere, which is why 'KT' was written on the back of the silver replicas. All this from a garage sale, I swear you just can't make this stuff up!

(And in case anyone feels the urge to mention there are only eight structures in the photo instead of nine, I'll let you know now that the 9th structure was another ox and cart but the cart got squished by the heavy ugly dolls that were on top of it and my Mother is trying to carefully repair it, so it did not make it into the photo.)

[Updated 4/2014  Well looks like my sleuthing was not as accurate as one would like, I was informed by a kind observer of the following: These are not from Kuala Terengganu in Malaysia but from Kota Gadang in Sumatra. KT is short for Koto. Pieces like this were made for sale to visitors way back - they may be from the 1920s or so.]
Posted by Eva at 10:13 PM