More Photos From the Nuevo Silica Mine 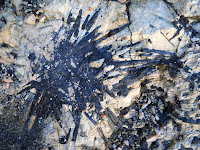 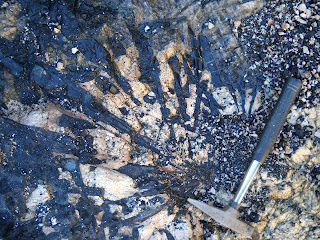 Here are a few more photos from the Nuevo Silica Quarry that I couldn't quite fit into the original articles but I think are worth posting anyway. One of the most striking things about the mine was the huge tourmaline sprays, but their true size was difficult to properly capture on film. The camera likes to make things look smaller than they really are. In the top photos, you can see several more of the interesting fan shaped patterns that some of the tourmalines formed in the host rock. 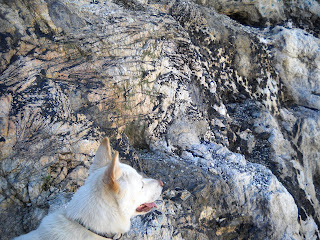 The photo to the right captures Sesame Pooch observing one of the areas were the tourmalines looked like splattered and dribbled black paint. The bottom left photo shows some of the water clear quartz and black tourmaline pieces that I took home with me (click the photo for a larger view). 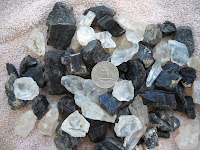 There was also one nice piece of smokey quartz, but I actually didn't spend much time collecting as I was so busy exploring and taking pictures.