How to Train Your Dog to Avoid Rattlesnakes

Erick Briggs of Natural Solutions Dog Training (Check website for schedule and availability) has the answer.

First, you need some rattlesnakes. Erick and his crew maintain a collection of various local rattlesnakes species, both large and small, so that each dog will be trained on a variety of likely encountered local rattlesnake species. During the dog training, each snake is muzzled for safety. This allows the snakes to be handled safely by humans and approached safely by dogs.

Then you need to give the dog a reason to not want to go near the snakes. This is done with a shock collar. Some may feel this method is hard for the dog, but personally, I feel it is much easier on a dog than a rattlesnake bite would be and Erick makes sure that only just enough stimulus is used to be effective. The strength of the stimulus is tailored individually to each dog. You just want enough to deter the dog from future encounters but you don't want to use more stimulus than necessary. 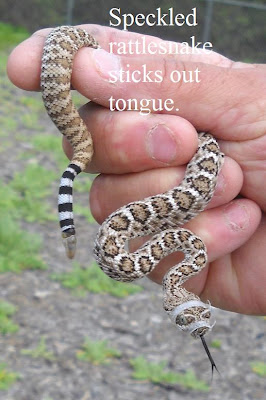 During the training, a snake is layed out on the ground. If a dog has never been trained before, it is not uncommon that such a dog will simply stroll right up to a rattlesnake to inspect it.

I remember the first time I took Sesame Pooch to be trained when she went right up to the snake and put her nose right on top of it! In any other situation, she would have guaranteed herself a bite! If anyone wants to tell me that using the shock collar is too hard on the dog, I will tell them that it would not be even 5 percent as unpleasant as the rattlesnake bite that she would have gotten otherwise.

Anyway, so what happens is when the dog allows itself to come close to the snake, the dog receives a carefully timed shock such that the dog thinks the snake was the cause of the unpleasantness. Some dogs at this point will already want to move away from the snake. But strongly curious or prey driven dogs will sometimes instead keep trying other tactics to get at the snake. 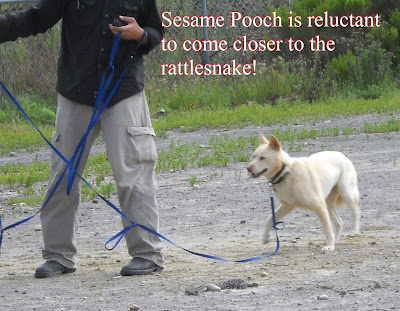 Of course, the whole process is not always that simple. Multiple snakes and situations are used and the dog is tested at the end of the process to make sure the lesson has been learned. And of course, each dog reacts differently and training methods are tailored to each dog. Some dogs will be energetic and jump around whereas other dogs' responses will be careful and measured. Some will be more curious or not curious and others will be more prey driven. And it is recommended that the lesson be repeated yearly to remind the dog and reinforce the avoidance.

This is Sesame Pooch's 4th training session and she becomes smarter each year about avoiding the snakes. This time, she was only willing to go a little bit close to a rattlesnake one time and only received one small correction. 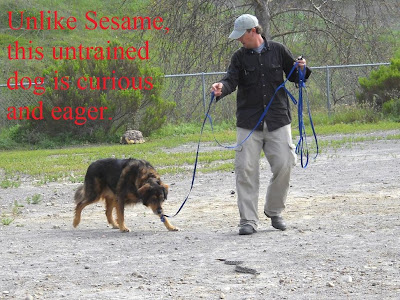 However, another dog that followed her was totally new to the training and acted much as Sesame did on her first training. In the photos, you can see this dog being curious about the snake but then later rearing back when the snake 'bit' him again. Eventually, the dog decided snakes were just not worth it and by the end of the training, this dog too had decided that rattlesnakes were best avoided. 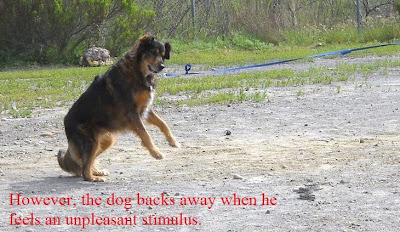 At the end of the training day, the Natural Solutions crew allowed me to take a few up close photos of some of their snakes. You can see that each snake has a muzzle preventing them from popping their mouth open, but the muzzle was not so tight as to prevent the young speckled snake from sticking his tongue out to inspect me during his photo op. 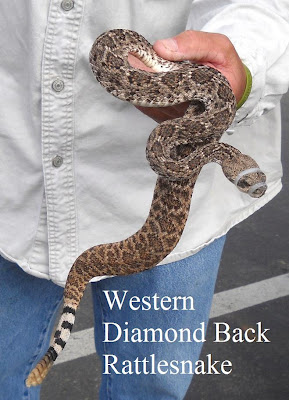 I will continue to take Sesame Pooch to the Erick Brigg's Natural Solution dog training each year and would recommend them to anyone whose dog runs the risk of encountering a poisonous rattlesnake.

No training is complete proof against snake bites. Sometimes, a dog (or owner) may not be aware of a snake, walk by unknowingly, and get bitten by accident. And sometimes a dog will be attracted by an injured or dieing snake because of the change in smell that occurs when death or gore is present. However, overall, a dog's chance of not getting bitten by a rattlesnake is much better after snake training. At least I know my dog will no longer stroll up and deliberately stick her nose on top of the next rattlesnake she meets! That alone is worth the $75 training fee.
Posted by Eva at 9:53 PM

Email ThisBlogThis!Share to TwitterShare to FacebookShare to Pinterest
Labels: rattlesnake