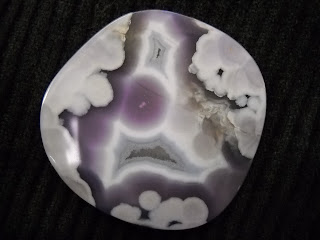 Eldon, one of the newer members of our rock club, recently moved into town. Eldon has extensive experience with rockhounding, silversmithing, casting, stone cutting, etc and always finds time to help the rest of us with any sticky lapidary problems. 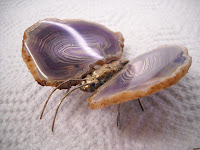 Recently, sitting around the table chatting at the rock shop, he told me the story of how one time long ago when he was working up in Northern Arizona, he ran into a man who had found a secret cache of beautiful purple agates up in the mountains. Eldon, of course, was immediately interested in the location of this agate, but the man would not immediately tell him. He wanted to keep it a secret, but he did give Eldon a very general vague description of the approximate location, such that Eldon would know where to start looking. 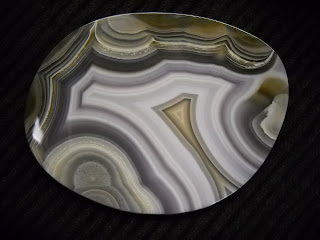 However, the description was so vague and the area was so vast that Eldon could not find it after many tries. Time after time, he went out searching, and each time, he came back to the man and told him where he had gone looking. Each time, as Eldon related his tale, the man would laugh gently when Eldon reached the point in his description where he had turned the wrong way. So each time, Eldon was given a new clue as to the location. And so he would try again. 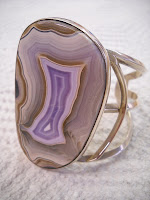 Two years later, Eldon finally found his purple agate. The collecting area was not large, but many nodules of banded purple agate were to be found and each rock had to be packed out many miles through rough terrain before it reached civilization. 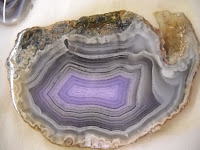 Some of the rocks had large spot patterns similar to ocean jasper. Others had many well delineated bands of color. Some just had gentle shadings of purple. All were beautiful and to this day, as far as we know, only Eldon and that one other man know of this secret agate location. Neither has ever told a single soul. 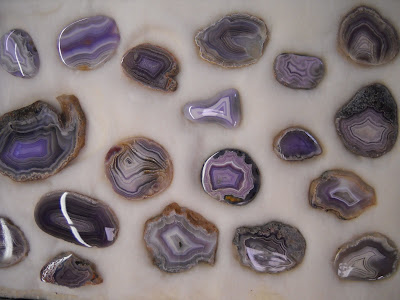 Here are some of the slabs and artworks that Eldon has created from his secret purple agate nodules. The butterfly body is cast in silver. The bracelet was a gift to his wife. These are not for sale, but they sure are nice to look at!
Posted by Eva at 9:56 PM