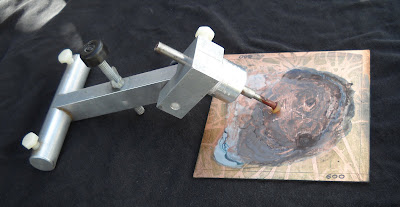 While walking the aisles at the tailgate, my eye was quickly caught by a small machine on a table (click on photo for larger view). It was Bob Johnson's table, but a nice young lady was manning it and allowed me to take pictures of their hand faceting machine. I never knew such a thing existed! She was in the middle of cutting a stone, which she said was coming out well.

The small hand machine sits on the table with the stone at an angle against a polishing plate. Various polishing compounds can be added to various plates depending on what stage the stone is at. The machine has dials to set angles. The user sets the angle, chooses the plate and the drags and swirls the stone around the plate manually. 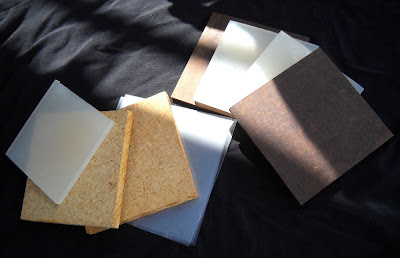 What struck me was that this machine would probably be quite a bit less in cost than your standard electric powered faceting machine. I was told this particular machine in the picture was purchased used for very little money. Since the tailgate show did not have electrical hookups to plug in a regular faceting machine, they were playing around with this little hand machine instead.

Looking on the internet, I do see there is a similar device available for $400 here, but I bet one of these could be found used for a lot less!
Posted by Eva at 8:03 AM