One of my latest little projects has been to redo a necklace that my mother found at a garage sale for a dollar. The original necklace had sterling silver round beads and long curved tube shaped beads strung onto a leather cord. We always like it when she can find sterling items for next to nothing, but neither of us cared much for how the necklace looked on us. In addition, the clasp was unreliable and would sometimes let loose after only a slight jostling. 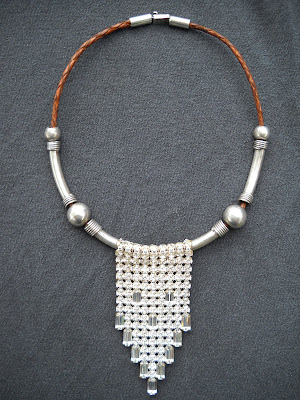 We both felt the necklace needed a center piece but after trying multiple options that we already had on hand, we still could not find anything that really wowed us. Luckily, about a week later, my mother found an old moth eaten white dress in a thrift store for a few dollars. The dress was a mess but on the neckline was stitched an interesting rhinestone assemblage which my mother felt would look nice on the silver bead necklace. So she bought the dress and tore out the rhinestones and stitched them onto the necklace as a center piece. At this stage, I thought to take a photo which you can see at the top right. (Click on photo for larger view.)

We liked the rhinestones as a center piece but felt that overall, the necklace now lacked cohesiveness, so I invested a few more dollars to buy four rhinestone and sterling Swarovski rondelles to add in between the other beads in order to bring some of the rhinestone flash into other areas of the necklace. 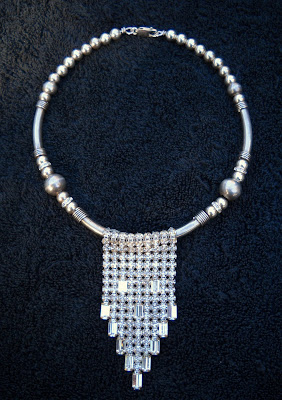 Then there was the problem of the leather and unstable clasp. The solution was to restring. At first, we had hoped to use a sterling silver chain in place of the leather, several of which my mother had on hand from other lucky garage sale finds. And we had some additional silver beads on hand that we could cannibalize from another ugly silver bead necklace my mother had once picked up. However, the holes in the existing silver beads were very large and designed for a large thick type of cord. The end result was that on a small thin chain, the silver beads would flop erratically and not hang straight. A similar thing happened when I tried Soft Flex beading wire.

For a while, I was at a loss as to how to have the necklace strung as I desired while still having the big hole beads hang properly. But finally I came on the idea of using a big thick heavy gauge silver wire and stringing the beads onto that instead. Happily, I already had some on hand that I had bought previously with vague plans to maybe use it in a soldering project someday. The thick wire managed to hold the beads steady. At each end of the necklace, I bent the heavy gauge wire around itself to form two loops. In one loop, I put a large lobster claw clasp and the other loop would be the place the clasp would attach. The second photo shows the finished product.

The end result is a ridiculously glam mix of art deco sparkle meets native American rustic. But we like it.
Posted by Eva at 8:27 AM