Last weekend, we had the County Council Tailgate show at the Vista Gas and Steam Engine Museum. The show is one big tailgate in a grassy field with all outdoor vendors, just the kind of show I like best. Low fees for vendor slots (just $20 per large slot) means that I will find lots of rough cutting material and the show will have more vendors oriented towards rockhounders. This is the third year for this show and I have been pleased as to how the show has evolved. I think this show is well on its way to becoming the best show in San Diego for rockhounders. 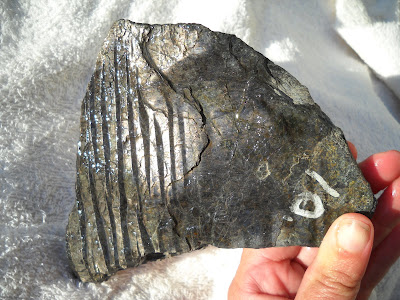 I am also pleased that in the second row of vendors, I found a rough material that I have been trying to find for several years now. Many years ago at Quartzsite, I found a scrap of a slab sitting in a bin of water. The slab was dark grey with lines of chatoyant banding. I love chatoyant rocks and had never seen this one before so I snatched it up and asked the vendor what it was. He said it was called hypersthene, which I had never heard of. He didn't know much about it but it was only $.50 which is my kind of price! I took it home and didn't work on it for quite some time. I figured it looked like crumbly metal and would probably be messy and not cab well, so I put off trying it. But eventually, I got to it and was surprisingly pleased with the results.

Cabbing it was not much of a mess after all. I had feared it would be something like the black morass that happens when cutting psilomelane but instead, it cut more like jasper, except softer. And only one small corner crumbled. The rest polished up nicely. Now I was in love with this stone and wanted more! 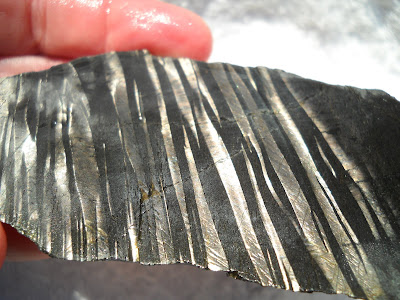 But I couldn't find it. Most places that touted they had it instead had what looked like low grade bronzite, or the hypersthene they did have lacked the chatoyant banding. A year later, I did find some slabs of it again at Quartzsite but the vendor wanted at least $30 per slab which seemed quite a lot! I wasn't ready to pay that much at the time, but as the months dragged by and still I could find no other source, I began to regret not having bought the expensive stuff when I could.

Until last weekend that is! One vendor had about 10 pieces of hypersthene there for $8 to $18 dollars. Some pieces lacked the the chatoyant banding so I skipped those and settled for 2 chunks and one slab. You can see a rough piece in the top photo, the slab in the middle photo, and you can see a pendant I made from my original tiny slab in the photo below. The pendant is denim lapis with 3 cabs of polished hypersthene. 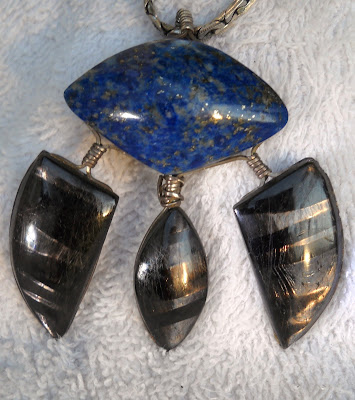 I was told by the vendor, whom I foolishly did not get contact info for, that this hypersthene material comes from somewhere in Canada. Here's some of the technical info on hypersthene.

There were also many other neat things at the tailgate, many that I could not afford. And I spent a lot of time talking to vendors and learning things, which was just as fun. Need I mention again, this was my kind of show! I'll be going again for sure next year and in the following days/weeks, I will be posting about other interesting things I saw at the show.
Posted by Eva at 8:47 AM