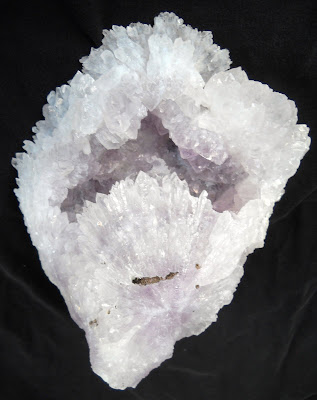 Inside one nice covered outdoor booth were many especially beautiful specimen types of stones but one type in particular caught my eye here. They were called 'amethyst flowers' and were large, about one foot or more in diameter, sprays of amethyst. Almost no bits of host rock were evident. It was all quartz. Some of the specimens had a bowl shaped pattern with steep sides, almost like the bottom of a bucket.

The one in the second photo was (if I remember correctly) over a foot across and was priced at $200.00 which I thought was very reasonable. Apparently, the amethyst flowers are found in layers of basalt and the flowers must be carefully taken out and then the basalt and matrix must be carefully removed from the flower using hand tools. Sounds very tedious! 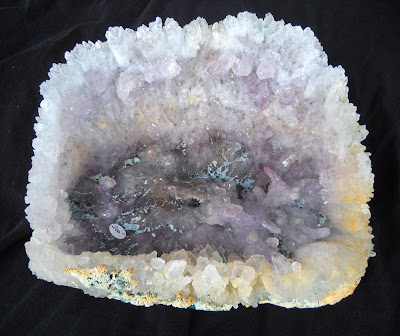 The flowers appeared delicate but seemed surprisingly sturdy when handled. The proprieter of the booth looked only slightly nervous (and I don't blame him!) after telling me it would be OK for me to move the flowers around to gain better photos.

He was very nice to me and mentioned that he also did watch repair, and custom stonework for watch bands. I don't know of anyone else in the San Diego that does that. As a courtesy, I will include here a photo of his card and contact information for anyone who might be interested. 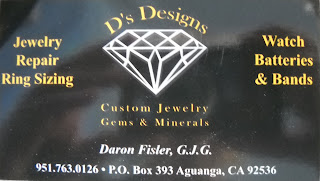